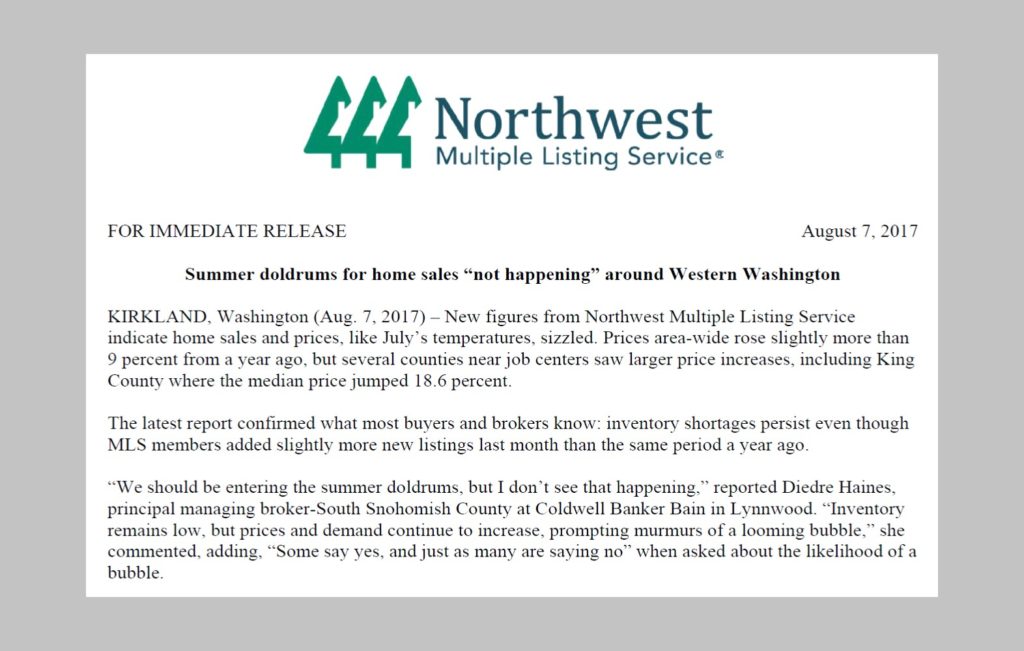 KIRKLAND, Washington (Aug. 7, 2017) – New figures from Northwest Multiple Listing Service indicate home sales and prices, like July’s temperatures, sizzled. Prices area-wide rose slightly more than 9 percent from a year ago, but several counties near job centers saw larger price increases, including King County where the median price jumped 18.6 percent.
The latest report confirmed what most buyers and brokers know: inventory shortages persist even though MLS members added slightly more new listings last month than the same period a year ago.
“We should be entering the summer doldrums, but I don’t see that happening,” reported Diedre Haines, principal managing broker-South Snohomish County at Coldwell Banker Bain in Lynnwood. “Inventory remains low, but prices and demand continue to increase, prompting murmurs of a looming bubble,” she commented, adding, “Some say yes, and just as many are saying no” when asked about the likelihood of a bubble.
In some areas, inventory is showing some signs of growth, Haines noted, but it’s still “way below what would be considered anywhere near normal. Frankly, I am not even sure anymore exactly what normal is – perhaps the current low inventory status is the new normal.”
Northwest MLS members added 12,300 new listings during July, a meager 122 more than the same month a year ago, but well below June’s total of 13,658 new listings.
At month end, there were 15,749 total active listings, down 13.9 percent from the year-ago total of 18,287. Measured by months of supply, there was only about six weeks (1.6 months) in the MLS system overall, which encompasses 23 counties. Twelve months ago it was closer to two months of supply (1.93 months).

Here is the full press release…