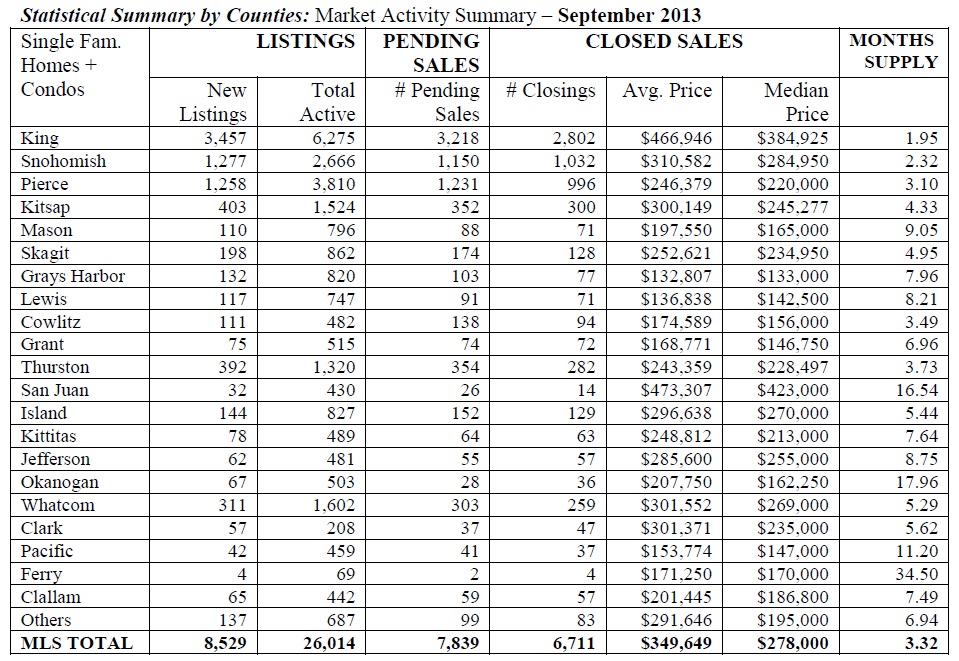 box-margin-rt-5The Northwest MLS (NWMLS) has released statistics for October, 2013 last week. The short summary… the real estate market has put on the brakes. That seems clear. Now the question is “Why”? The possibilities include the effect of the government shutdown (undoubtedly part of it), typical seasonal slowdowns (starting slightly early), or below-normal inventories. I think the last is a bit of wishful thinking by brokers. I’ve been telling clients that there is a distinct possibility that the price recovery could stall, at least in the short run. Interest rates are holding fairly steady… but have still risen. Also, the economy still isn’t recovering as fast as people hope. Why do you think prices are not continuing to increase?

Here is the full news release:

Home sales “paused” during October but prices continued to rise, according to the latest statistics from Northwest Multiple Listing Service. Commenting on year-to-date totals for 2013 compared to 2012, one industry expert remarked, “I would say the real estate market is recovering nicely.”

KIRKLAND, Wash. (Nov. 5, 2013) – Home sales “paused” during October but prices continued to rise, according to the latest statistics from Northwest Multiple Listing Service. Commenting on year-to-date totals for 2013 compared to 2012, one industry expert remarked, “I would say the real estate market is recovering nicely.”

Pending sales during October dipped 2.7 percent when compared to the same month a year ago, but rose nearly 3.2 percent from September’s volume. October’s decline was the first negative change in year-over-year comparisons since April 2011. (That drop-off was attributed in part to a frenzy during April 2010 when buyers were scrambling to take advantage of a federal tax credit that was expiring.)

Brokers point to the federal shutdown during the first two weeks of October, below-normal inventory, and shaken consumer confidence as factors in the slowdown.

MLS figures summarizing last month’s activity across the 21 counties in its service area show year-over-year improvement in inventory (up 5.5 percent), double-digit increases in the volume of closed sales (up 12.5 percent), and moderate increases in selling prices (up 7.7 percent).

“We are two years into what has been a very steady recovery. It’s okay – and actually healthy – to have a slight slowdown,” he remarked. The government shutdown “definitely hurt consumer confidence” and put many would-be buyers on the sidelines, according to Gain.

Consumer confidence “deteriorated considerably” in October as a result of the shutdown and debt ceiling squabbles, according to The Conference Board. A recent Gallup poll found some improvement in Americans’ economic confidence, but reported it is still well below mid-September, before the shutdown.

Gain said despite improving inventory the limited supply of homes for sale is also hampering sales. “Numerous buyers are looking but just can’t find the right home to fit their needs,” he reported.

Northwest MLS brokers reported 8,086 pending sales during October, down from the year-ago total of 8,312 sales, but outgaining the number of mutually accepted offers in September by 247 transactions for a 3.2 percent increase. Eleven counties had fewer pending sales last month versus a year ago.

In King and Snohomish counties the “torrid pace” of home sales activity has eased to a “healthy/strong level,” observed J. Lennox Scott, chairman and CEO of John L. Scott Real Estate. He believes the housing market is transitioning from a recovery market to a sustainable mode.

Homes that sold in San Juan County last month fetched the highest median price at $384,000, up 17.2 percent from a year ago. King County prices were slightly lower at $380,000, about 11 percent more than the median price of a year ago.

Gain said the increases reflect a healthy and stabilizing real estate market. “It is good to see the prices rising modestly, allowing the market to become more balanced,” he stated.

Northwest MLS director George Moorhead agreed, saying more moderate and balanced growth helps “mitigate huge home price fluctuations.” The slowdown is also reflected in the time it is taking listings to sell, he noted. “We are seeing inventory staying on the market longer, which will continue through the holiday season until late January to mid-February,” said Moorhead, the managing broker at Bentley Properties in Bothell.

More inventory is still needed to meet demand, suggested Dick Beeson, principal managing broker at RE/MAX Professionals in Tacoma and a past chairman of the Northwest MLS board of directors. In Pierce County, where his office is located, inventory is about even with year-ago levels, but 2,019 more sales have closed so far this year for a jump of 25.4 percent.

Three counties – King, Pierce and Snohomish – have less than three months of supply, well below the 4-to-6 month level that is generally considered to be an indicator of a balanced market.

At least one segment of the new construction market shows signs of rebounding: condominiums.

“Most residential developers went into hibernation during the real estate bear market of the past five years, but this past month heralded a bullish resurgence of several developments,” said John Deely, a member of the Northwest MLS board of directors. Last month was like spring in the South Lake Union neighborhood, he reported.

Deely, the principal managing broker at Coldwell Banker Bain in Seattle, cited the opening of sales for a new 41-story condominium community and the restart of two other major residential developments as positive indicators. The projects include a high-rise residential development near the Space Needle and the restart of a hotel-condo building in the Denny Triangle area of downtown Seattle. “This is good news as the market is starving for new condominium inventory,” he stated.

Beeson also commented on upticks in condo activity. He said some condo developers who placed units in the rental pool during the 2008-2010 downturn are converting them back to for-sale housing and trying to sell them in today’s improved market. “The price points have still not returned to 2006-2007 levels but the chance to move some product now exists,” he commented.

MLS brokers added more than 1,000 new listings to condo inventory last month, a jump of 24.3 percent from a year ago. Total inventory is 9.1 percent higher than at this time last year. Closed sales during October jumped 15.3 percent, with prices rising about 5.3 percent.

Condos that closed during October had a median price of $200,000. In King County, which accounted for about two-thirds of those sales, the median price was $234,000.

“The real estate market has been moving in the right direction,” observed Gain, adding, “It has been a huge improvement over the past several years.” To underscore his point, he noted pending sales year-to-date are up by nearly 6,000 units (at 5,994) for a 7.3 percent increase. YTD closed sales are already up 10,167 units from a year ago for an increase of almost 19 percent (18.8), and prices are up by $27,000 for an increase of 11.1 percent. “I would say the real estate market is recovering nicely,” he concluded.

Northwest Multiple Listing Service, owned by its member real estate firms, is the largest full-service MLS in the Northwest. Its membership includes more than 21,000 real estate brokers. The organization, based in Kirkland, Wash., currently serves 21 counties in Washington state.