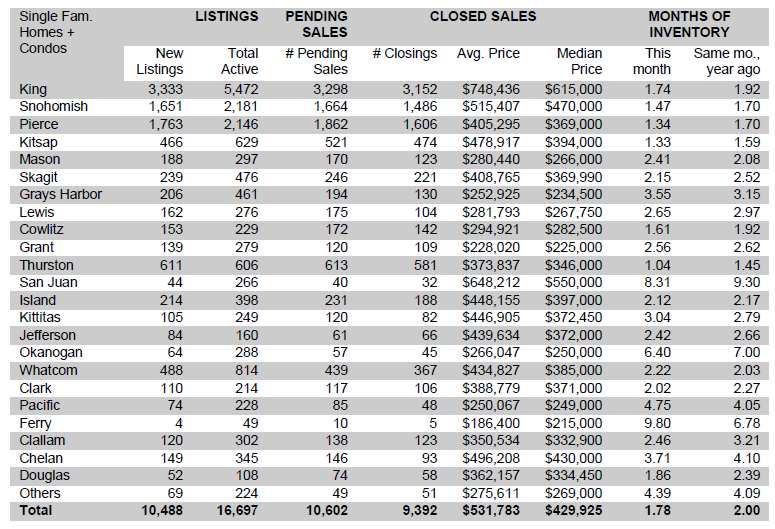 The Northwest MLS has released its latest market report for the month of August. The market is still tight, which is pushing folks out of King County — no surprises there. Here is the full release. As always

KIRKLAND, Washington (September 9, 2019) – Depleted inventory continues to frustrate would-be buyers in Western Washington. Many of these potential homeowners are expanding their search beyond the major job centers in King County, according to market watchers who commented on the latest statistics from Northwest Multiple Listing Service.

The MLS report summarizing August activity shows less than two months of supply system-wide, and only about 1.6 months of supply in the four-county Puget Sound region. The sparse selection is pushing up prices. For last month’s sales of single family homes and condos across the 23 counties served by Northwest MLS, prices rose nearly 6.2% compared to a year ago.

“Areas immediately outside the Puget Sound region and along the I-5 corridor continue to see double-digit house price growth,” noted James Young, director of the Washington Center for Real Estate Research (WCRER) at the University of Washington. He attributes the increase to high demand in these areas “due to first-time homebuyers who struggle to afford housing in King and Snohomish counties as well as from existing homeowners cashing out of Seattle and King County.”

“While August is always a slower time for listings and sales, what is really surprising this year is the decrease in new listings taken, while pending sales increased,” observed Mike Grady, president and COO of Coldwell Banker Bain.

Brokers reported 10,602 pending sales (mutually accepted offers) during August for a 4.9% increase from a year ago. Pending sales rose nearly 6.6% in the Puget Sound region, led by Snohomish County with a gain of 15.8%. Six counties had double-digit gains while an equal number had declines.

Grady noted June and July were also lackluster this year with regard to listings “when typically they are both still fairly active coming off spring. The pending sales numbers indicate that buyers are indeed out there and willing to purchase, but there are simply not enough homes,” he commented, adding, “Everything that is listed is getting sold and fairly quickly.”

The volume of total active listings is down more than 10% from a year ago, with only four of the 23 counties in the report showing a year-over-year increase (Chelan, Grays Harbor, San Juan and Whatcom). Fourteen counties had double-digit drops. At month end there were 16,697 active listings in the MLS database, down from the year-ago total of 18,580.

MLS figures show only seven counties have more than three months of supply, with four-to-six months generally considered the volume needed for a balanced market.

Frank Wilson, Kitsap regional manager and branch managing broker at John L. Scott Real Estate in Poulsbo, also
commented on depleted inventory, but expects improvement. “As we head into the fall market our listing
inventory continues to lag last year’s numbers, but we should see a bump in activity now that kids are back to
school and vacations are over.” He noted the supply crunch has led to rising values, with median prices for last
month’s sales in Kitsap County surging 14.2% from twelve months ago.

Multiple offers are still commonplace with many buyers walking away disappointed, according to
Wilson. “Traffic is strong at open houses and our average market time is still very low for correctly priced
homes,” he added.

“The August numbers offered a few interesting nuggets,” stated OB Jacobi, president of Windermere Real
Estate. “The Seattle area housing market is still coming off the ‘sugar high’ that we saw last summer, but
homes sales and prices are stabilizing, which is reassuring to both buyers and sellers.”

Jacobi also noted buyers are drawn to areas outside King County in search of affordability. “Pierce
County is now experiencing what King County did 24 months ago where a surplus of buyers and lack of
supply are pushing up home prices. Snohomish County also saw a big bump with a massive 16% increase
in pending sales year-over-year. This tells us the secret is clearly out that housing in the counties to the
north and south of Seattle is more affordable.”

Prices for single family homes (excluding condos) rose 6% from a year ago, while condo prices ticked up
by only about 2%.

Brokers expect favorable conditions for both buyers and sellers in the coming months.

“As we enter the fall housing market, both interest rates and job growth in Puget Sound are extremely
positive,” stated J. Lennox Scott, chairman and CEO of John L. Scott Real Estate. Saying these are both
key indicators of a strong housing market, Scott noted September and October are “historically the best
for selection and availability out of the next six months,” adding, “With kids back in school and summer
vacations over, homeowners who wish to sell their house before the winter season will look to put their
home on the market soon. Similarly, buyers can take advantage of the market timing and low interest
rates in the next two months to come.”

“Low interest rates, strong job creation, and lifestyle changes continue to attract buyers to the market,”
said Dean Rebhuhn, the owner of Village Homes and Properties in Woodinville. He also reported the
move-up market is very active, while acknowledging challenges for first-time home buyers. “A challenge
for them is assembling the down payment,” he explained. “We are seeing FHA and VA financing being
used for low and zero down mortgages. Also, family assistance is a big help.” He expects “very good
activity” during September and October.

With brokers anticipating solid activity in the next few months, Wilson offered advice for both sellers and
buyers. Sellers need to make sure their home goes on the open market in order to be exposed to as many
buyers as possible, he emphasized. “To do anything else may be leaving money on the table.”

For buyers, Wilson stressed “getting all your ducks in a row. Meet with a lender for pre-approval before
looking for homes, be clear as to what you can live with or without in your next home, and if at all
possible, use cash or a conventional loan,” which he explained are more appealing to sellers in multipleoffer
situations.

Northwest Multiple Listing Service, owned by its member real estate firms, is the largest full-service
MLS in the Northwest. Its membership of around 2,300 member offices includes more than 29,000 real
estate professionals. The organization, based in Kirkland, Wash., currently serves 23 counties in the state.